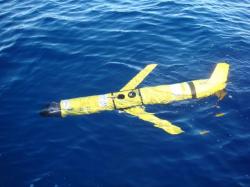 Gliders are unmanned underwater vehicles originally designed to observe vast areas of the interior ocean. Gliders make use of their hydrodynamic shape and wings to induce horizontal motions while controlling buoyancy. Buoyancy control also allows for vertical motion in the water column. This propulsion method requires low power consumption, awarding gliders with long endurance at sea (up to several months).

There is a growing interest in gliders by naval forces due to their long endurance, autonomy and maneuverability at sea. The second CMRE workshop on military applications of glider technology will be held at the NATO-STO Centre for Maritime Research and Experimentation (La Spezia, Italy) in October 7-9, 2014.

The workshop will explore the applications of underwater glider technology to military operations.

The workshop will be based on case studies with gliders including the environmental characterization of denied areas, passive detection of acoustic sources, sustained monitoring and surveillance of marine regions, multistatic acoustic detection, among others. The event is designed for commanders who seek to extend their expertise to new robotic technology for sea surveillance and characterization, and for scientists and engineers interested in how this technology can address challenges in present naval warfare. The number of participants is limited to 50, to fit the length and the intended depth of the meeting. Registration deadline has been extended to 9 August 2014, 12:00 PM, GMT+1.

Attendance is limited to the nationals of the 28 member countries of NATO. The meeting will be held at NATO UNCLASSIFIED security level.