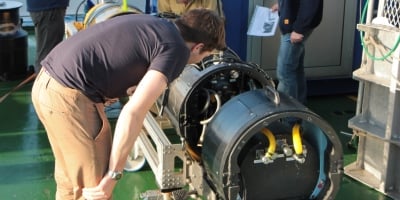 There are now 18 NATO Nations represented on the CMRE staff. Research fellows also include two young professionals from Turkey.

In the last few weeks, CMRE welcomed nine new scientists, all enrolled in the Centre's Visiting Researcher Programme, which offers the best and brightest students, university researchers and practicing professionals from NATO Nations the opportunity to work at CMRE. The latest researchers come from Italy, USA, Turkey, Spain, Croatia, Greece and for the first time the Czech Republic. Mr Ondrej Hrstka, who has the honour of being the very first Czech citizen serving at the Centre, is specialized in artificial intelligence and is now working in the Maritime Security programme, focusing on counterpiracy simulations.

Initially called "Summer Research Assistant" programme, the VRP programme started in 1961 (when the Centre hosted 3 participants) and, ever since, the number of the its participants constantly increased up to an average of 25 participant per year. In 2009 the Centre hosted the record number of 31 Visiting Researchers.
Traditionally the call for applications to the VRP programme used to take place in fall each year, in order to select the best candidates for the following summer. But since January 2013 the Centre changed the recruitment scheme of the VRP programme and now it is open for applications throughout the year, in order to constantly address the opportunities and the needs deriving from the CMRE Programme of Work. CMRE also draws from to the pool of candidates when short term manpower requirements are identified.

In 2014, 47 applications were received and 18 young researchers were selected, including the nine fellows who most recently already joined the Centre and other four VRPs expected to join CMRE during the summer.
To apply, visit the Visiting Researcher Programme web page.