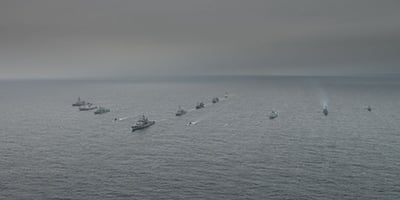 The exercise started on 4 May 2015, off the coast of Norway, with ships, submarines, aircraft and personnel from 10 Allied and 1 Partner Nation converging on the Norwegian Sea for anti-submarine and anti-surface warfare training. Submarines under operational control of NATO Submarine Command (COMSUBNATO) joined thirteen surface ships under the command of Standing NATO Maritime Group TWO (SNMG-2) Rear Admiral Brad Williamson. The surface ships include the NATO Research Vessel (NRV) Alliance.

The aim of this exercise is to provide all participants with complex and challenging warfare training to enhance their interoperability and proficiency in anti-submarine and anti-surface warfare skills.

CMRE takes part in DMON 15 to evaluate the performance of CMRE autonomous networks in northern environments and in an ASW context, including shallow waters. Potentially, these networks of autonomous sensors offer persistent surveillance, outperform traditional assets while costing less, and take human operators out of harm’s way. From NRV Alliance, CMRE scientists are deploying a fleet of underwater robots, including gliders, wave glider and propelled autonomous underwater vehicles. CMRE is also assisting operators and planners at sea in other units through the use of its Multistatic Tactical Planning Aid (MSTPA) allowing a visualization of the undersea environment and predicted sonar performance.

“CMRE is glad to demonstrate autonomous security networks for ASW during DMON15, NATO’s northerly ASW exercise. NATO Allied Command Transformation is funding this to push ahead the scientific knowledge and demonstrate the concept in an operational context”, says Ryan Goldhahn, CMRE Scientist-in-Charge at DMON15. “The inclusion of CMRE in this exercise reflects NATO’s recognition of the importance of these future capabilities, and the commitment to working with researchers to improve the way NATO’s navies operate at sea. CMRE would very much like to thank COMSUBNATO, COMSNMG-2, Host Nation Norway and the other Nations participating in DMON15 for making this experimentation possible”.