Until the 1980s, anti-submarine warfare (ASW) in NATO relied heavily on passive sonar. The introduction of much quieter submarines by the Soviet Navy required the development of different sonar systems, emphasizing on active sonars. There were different solutions proposed and researched. In another article we have described the Activated Towed Arrays Program, which is a valid approach when only one ASW platform is available. When several platforms are involved in submarine detection and tracking, the Multistatic Sonar systems are the choice instead.

A multistatic sonar system is composed by a combination of sonar sensors (either active or passive) placed at  different locations. As the type of platforms and their numbers are variable, configurations are multiple: a multistatic sonar can include an active sonar (a hull-mounted or towed source in a frigate), a passive array towed by another ship or an autonomous underwater vehicle (AUV), an array of sonobuoys and another array of moored hydrophones, becoming a real sensor network. There are several advantages of the multistatic over the monostatic solution: excellent triangulation of the target position and its tracking, increased covertness of the receiving platform(s), extended and flexible echo-ranging, etc.

The multistatic concept was already formulated in the 1950s, but it experienced a revival in the 1980's with the advances in digital signal processing and communications (either under or above water), which greatly facilitated the implementation of underwater sensor networks. The active part of the system was to be a Low-Frequency Active Sonar (LFAS), in order to achieve greater detection ranges.The Centre (at the time known as SACLANTCEN) started at the time its research and development of multistatic sonar systems. Several characteristics of the Centre programme of work were:

Valuable, proven at-sea, target tracking tools as the Distributed Multi-Hypothesis Tracking (DMHT) algorithm were developed and made available to the nations. Also, the current MSTPA  (Multistatic Tactical Planning Aid) had its origins in this project.

Several NATO nations participated and benefited from this programme of work. Some of the institutions which participated in the sea trials were the DSTL (UK), FGAN and FWG (Germany), TNO (Netherlands), and several US ones sponsored by the Office of Naval Research.

After these early experiments in the decades of the 90s and 2000s, the CMRE has kept the development of more sophisticated systems, involving also other nations. 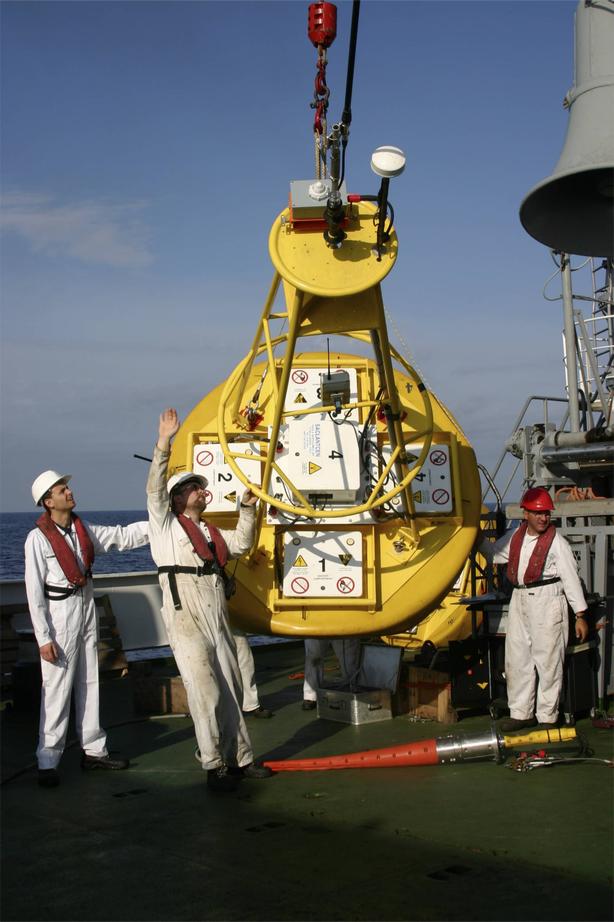 Above: transducer rings and a buoy that are part of the DEMUS LFAS system operated by the CMRE for experimental purposes.