In a world where small water craft can be turned into weapons against navy destroyers and pirates can hold ships for ransom, surveillance of the sea is of increasing importance. Because surveillance resources are inadequate to monitor the world’s shipping channels, tools that help maritime surveillance analysts identify suspicious activity are extremely valuable. This is why CMRE is developing the Maritime Surveillance System--a tool that NATO nations canuse to select the correct suite of sensors to monitor areas of interest.

The Maritime Surveillance System builds on recent work at CMRE that uses information from the Automated Identification System (AIS) and applies anomaly detection algorithms and filters to provide the NATO maritime surveillance community with information on unusual behaviour. Unusual behaviour might include unexpected ship stops or unexpected changes in course. The Maritime Surveillance System will require continued advances in anomaly detection as well as in two other areas of research: sensor performance and data fusion. 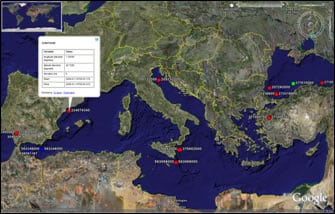 Sensor performance. Currently maritime sensors include a mix of sensors, some of which work in a cooperative fashion (for example, the AIS and some of which work independently, for example, surveillance and high-frequency (HF) radar, active and passive sonar, and satellite-based EO (electro-optical) and SAR (synthetic aperture radar) imagery. The Centre is conducting a performance evaluation of all available types of sensors. Sensors are evaluated and compared based on common parameters (detection range, ROC detection performance curves, and localization accuracy) as well as parameters that are specific to the sensor technology (for example, daylight requirements for EO imagery).

Data fusion. Developing a clear picture of the maritime environment requires sophisticated data processing techniques. For this task, CMRE will expand on its existing distributed multi-hypothesis tracker (DMHT). The DMHT is a high-performance, computationally-efficient set of complex algorithms (or data fusion engine) that have been used to interpret data from underwater and surface surveillance. These algorithms are being expanded in a variety of ways, including the ability to use input from multiple sensors and the ability to fill gaps in temporal or spatial data.