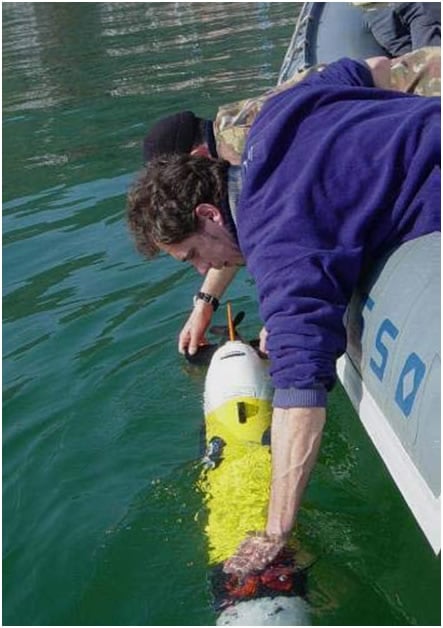 Mine countermeasures involve finding the mine, classifying it, and destroying it so that it is no longer a threat. Currently, AUVs are being used to survey the seabed to detect mines; however, classifying the mines and destroying them still rely to a great extent on expert divers, who are placed in harm’s way, and to ROVs, which are expensive if treated as an expendable device. AUVs have the potential to offer a safer, faster, and lower-cost solution for mine classification and disposal.

The Centre is working totransform the way mine countermeasures are conducted from a post-Cold War approach that focuses on post-operations clearance using surface ships to a quickly deployable, autonomous system that is scalable, cost effective, and minimizes risk to personnel. Recently, work at the Centre has focused on using AUVs for mine hunting, including developing techniques for handling the large data rates associated with modern high-resolution sonar and developing AUV systems that can make adjustments to pre-planned routes based on data that is gathered in situ. Now, the Centre’s emphasis is expanding from using AUVs in mine hunting to using AUVs in mine identification and mine disposal.

Mine identification. Classifying mines once they are found has historically been a time-consuming, resource-intensive process. The goal of CMRE’s research is to determine the feasibility of using high-resolution sonar mounted on AUVs for mine “super classification.” Super classification simply means that an object is quickly classified with sufficient confidence to proceed to disposal. The task involves getting multiple images, or views, of the mine, fusing those images into a single image that can then be classified with high confidence using automated techniques.

Mine disposal. The emphasis in this area is on finding an autonomous and cost-effective solution. Currently, mine detonation weapons (MDWs) are typically guided to the mine by an ROV, which is often treated as being expendable despite its high cost. Self-guided MDWs exist, but they are even more costly.  Emphasis is being placed on a stripped down, inexpensive MDW design that minimizes the number of sensors and processors on board while relying as much as possible on external support for guidance and control. A variety of options are being explored for transporting the MDW including AUVs, autonomous surface vehicles (ASVs), and airborne platforms (naval helicopters or unmanned air vehicles).