CMRE shows advances in autonomous algorithms for mine countermeasures operations 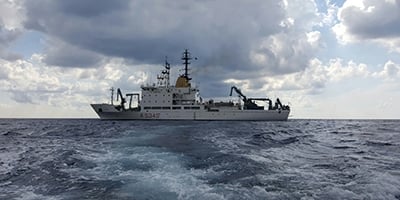 Back from the French-led exercise Olives Noires 2016 , the NATO Research Vessel Alliance is now in the Ligurian Sea to continue scientific tests of new robotic solutions for naval mine countermeasures as part of the Multinational AutoNomous Experiment 2016 (MANEX ‘16).

From 30 September to 7 October 2016, the NATO Research Vessel Alliance, operated by the Italian Navy for the NATO Centre for Maritime Research and Experimentation (CMRE) based in La Spezia (Italy), is operating in the Ligurian Sea, off the coast of Framura (La Spezia) as part of the Multinational AutoNomous Experiment 2016 (MANEX ‘16) led by the Centre. The primary purpose of the experiment is to test solutions and advanced methods for using robotic systems in mine countermeasures (MCM), while consolidating results and lessons learned from the recent partipation in the French-led Olives Noires 2016 (ON16) exercise, just concluded off the French coast of Toulon.

CMRE Technologies were presented to the press during a Media Day at sea on 30 September 2016 off the coast of Framura (La Spezia, Italy).