Hunting bombs in the Baltic Sea 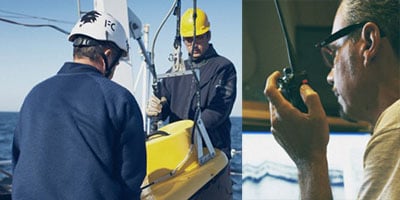 CMRE was part of the Monitoring of Dumped Munitions (MODUM) project supported by NATO’s Science for Peace and Security (SPS) Programme.

A variety of chemical weapons and explosives left over from the Second World War are still posing a potential threat to marine life and the population surrounding the Baltic Sea. An international team of scientists helped to locate and understand this threat in the Baltic Sea through a multi-year research project supported by NATO’s Science for Peace and Security (SPS) Programme.

CMRE was part of the team thanks to its extensive expertise with the use of unmanned systems for mine countermeasures, including experimental advanced solutions.

In 2014, CMRE offered to the MODUM team of scientists highly efficient training and familiarisation on board the NATO Research Vessel Alliance during the MANEX ‘14 sea trial. The MODUM team operated its own underwater robots in the Ligurian sea to test their tracking systems during complex missions. The viable technical solution provided by CMRE proved to be successful in 2015 during the MODUM sea-trial in the Baltic Sea on board the Polish research vessel Oceania.

The data acquired during the project will serve as a basis for a risk management tool for decision-makers to determine their responses in face of the dumped munition sites. “CMRE participation in the Baltic sea trial was a very valuable experience”, reported the CMRE team. “We experienced a strong multidisciplinary involvement. The possibility to merge information coming from acoustic imaging devices, acoustic geophysical devices, and magnetometers together with chemical analysis was crucial. The usage of these sensors attached to autonomous vehicles, made it possible to develop effective methods for monitoring of historical munition dumping sites.”

Results from MODUM CMRE experimentation will thus provide a promising baseline for future investigation, in particular on the capability of detection of groups of large buried objects using acoustic geophysical devices like the sub-bottom profiler. Overall, the research will help the nations surrounding the Baltic Sea to form a long-term strategy to combat this threat.

The story of the MODUM project is now told by NATO TV in the video “The bomb hunters of the Baltic Sea”.