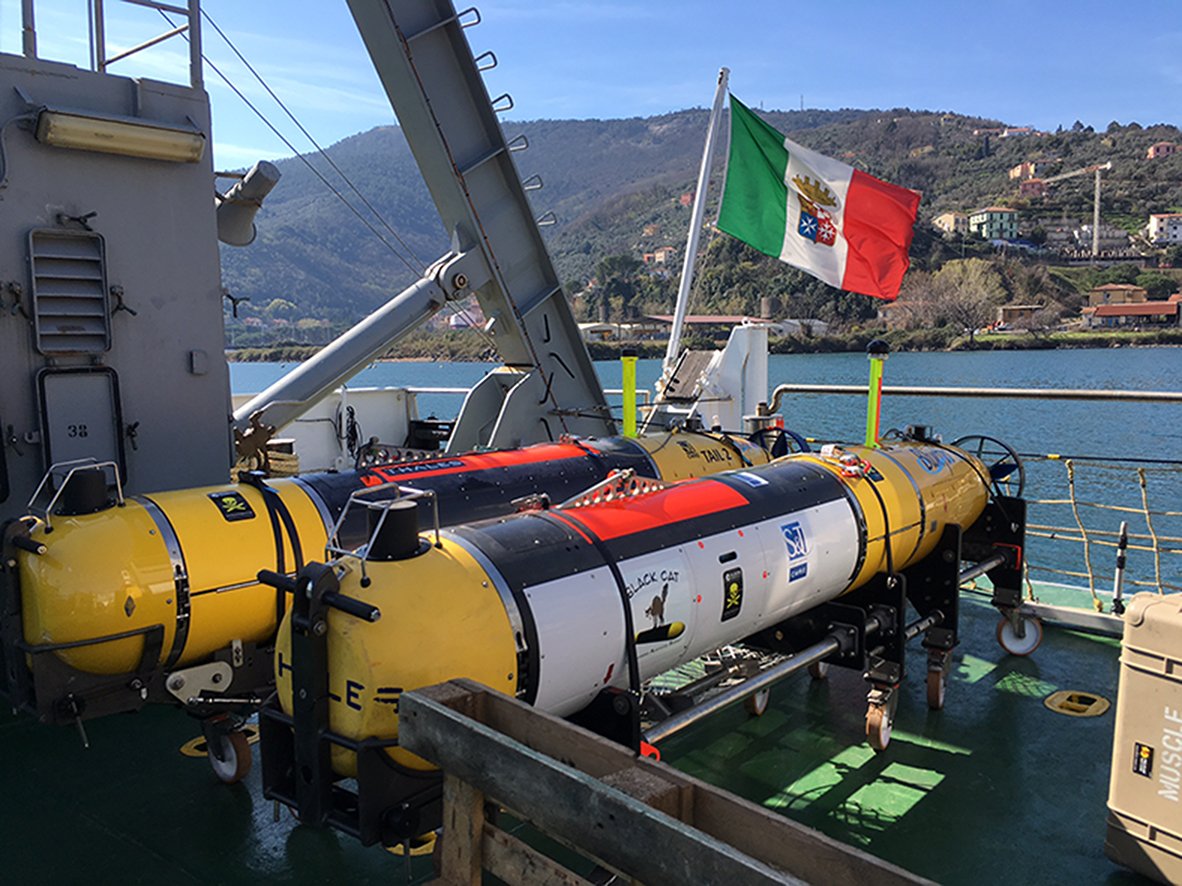 The NRV Alliance just sailed for her first NATO sea trial of the year. New assets on board are aimed to enhance collaborative robotics for MCM applications, including a new vehicle, which only apparently duplicates the CMRE MUSCLE prototype.

Your eyes are not deceiving you. On the aft deck of the NATO Research Vessel Alliance, sailing for the first CMRE (Centre for Maritime Research and Experimentation) scientific campaign of 2017, there are two very similar robots. One is the MUSCLE vehicle, a very reliable prototype developed by CMRE for seabed mapping with automatic behaviour capabilities. The other is not just a twin: it is a recently engineered underwater robot aimed at testing target (typically simulated naval mines on the seafloor) reacquisition missions.

This vehicle is called CAT, aka Black CAT, which stands for Collaborative Autonomy Testbed. It debuts during the current sea trial GAMEX ‘17, the Greek ARIADNE Mine countermeasure EXperiment 2017, conducted on board NRV Alliance from 28 March to 7 April 2017 in the Gulf of Patras (Greece) and linked to the Greek-led exercise ARIADNE ongoing in the same period. During GAMEX ‘17, the Black CAT is experimented to re-visit targets, acoustically detected by the MUSCLE, with its three sensors, a 2.25MHz Blueview downward-looking multibeam echosounder, a forward-looking 900kHz Blueview multibeam echosounder and a camera. This will enable further research on autonomy behaviours for target reacquisition, 3D target reconstruction and identification, and obstacle avoidance. In the long term, the CAT will be available for Nations to integrate additional side-looking sensors or test their own on-board processing and autonomy behaviours.

CAT tests perfectly fit in the GAMEX ‘17 main goal, i.e. advance methods for using robotics in Mine Countermeasures (MCM), in a diverse and challenging environment. Being part of a live exercise, this experimentation also makes it possible to benchmark robotic mine-hunting with conventional systems, thus facilitating the future technological transfer to operations. Interoperability and multi-vehicle collaboration is emphasised both to accellerate the MCM timeline (detection, classification and identification) and improve autonomous localisation capabilities through underwater communications. Networks of heterogeneous self-organising robots are put to the test, in order to achieve better and more rapid MCM missions.

External partners are also involved, including the Italian Navy REMUS AUV team and Greek observers. The overall goal of CMRE work in the field is to provide NATO nations with the concept demonstration of a reliable system of systems for MCM operations.