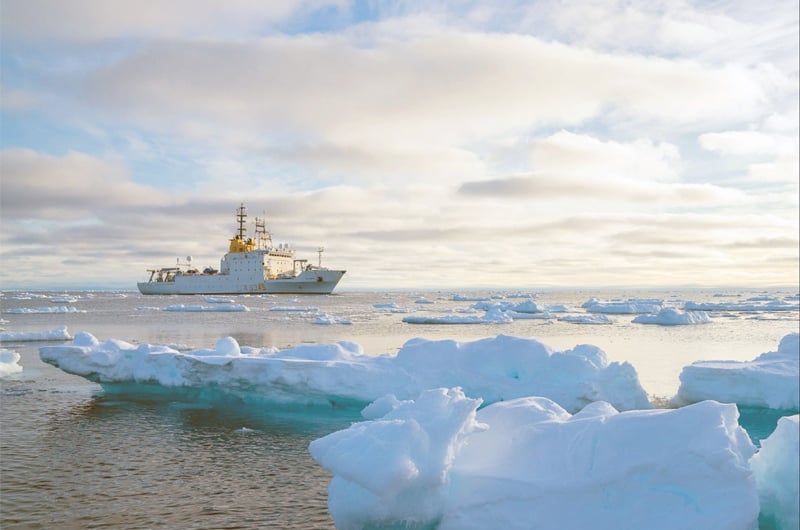 CMRE will conduct the Nordic Recognized Environmental Picture 2021 sea trial from 22 May – 29 July 2021 in the Greenland Sea.

On April 22, in honour of Earth Day, NATO Secretary General Jens Stoltenberg addressed the Leaders Summit on Climate. He stated that NATO has recognised climate change as a security challenge for many years and is now stepping up its efforts through NATO2030. NATO has a key role to play, however, “We must understand the problem, so we can better address it. … This includes investing more in research.” NATO recognises how the effects of climate change will significantly impact Alliance planning and operations.

In response, the NATO Science and Technology Organization (STO) is leading the Alliance into the future of defence through climate change research. Working hand-in-hand, the STO executive bodies, Office of the Chief Scientist (OCS), Collaboration Support Office, and Centre for Maritime Research and Experimentation (CMRE) provide analyses of climate scenarios to the Chief Scientist so he can inform the Secretary General, as well as the Nations, on how to best prepare for future security challenges.

To push this research forward, CMRE will conduct the Nordic Recognized Environmental Picture 2021 (NREP21) sea trial, supported by its Environmental Knowledge and Operational Effectiveness (EKOE) programme, from 22 May – 29 July 2021 in the Greenland Sea, on-board the NATO Research Vessel ALLIANCE. Funded by the NATO Allied Command Transformation, OCS and US Office of Naval Research, during NREP21 CMRE researchers will collect environmental data to better understand the transformation of sound propagation in a thawing Arctic Ocean, a key objective of the CMRE EKOE programme. With these data, CMRE will be able to help NATO and the Nations understand and adapt to the defence and security implications of climate change.

The NREP21 is part of a joint oceanographic campaign planned in coordination with the Italian Navy Hydrographic Institute’s High North 2021.

Climate change is rapidly reducing the extent of ocean ice in Arctic waters, leading to increased resource extraction and commercial and military activity, which inevitably increases the risk of conflict. The reduction of the Arctic ice coverage will increase significantly the potential areas for operating submarines with and without under-ice capability. This scenario brings a new level of urgency to the Arctic undersea environment that cannot be addressed with the outdated barrier-defence concept at the “GIUK Gap”, the naval choke point between Greenland, Iceland, and the United Kingdom. Alternatively, NATO forces must emphasize anti-submarine warfare (ASW) operations well north of the Arctic Circle. Unfortunately, allied ASW capabilities have diminished over time in this region, partially due to the general lack of familiarity of a rapidly transforming Arctic environment.

Understanding the transformation of sound propagation dynamics in Arctic waters is mediated by a series of ocean processes that will be either generated, reinforced, weakened or even destroyed by global climate change. Changes in the large-scale ocean circulation, driven by density gradients are among them. The NREP21 sea trial will be carried out in the Fram Strait/Yermak Plateau region where these dynamics are particularly intense. Oceanographic conditions will be continuously monitored, in an acoustic transmission line through a moored source and receivers, to understand and quantify the impact of physical phenomena on sonar performances and underwater communications. In addition, long-term moorings will be deployed to support future studies on the generation of warm water bodies and intensification of internal wave fields. The dataset will also feed into simulations on acoustic propagation in preparation of forthcoming acoustic experimentation in the area.

The NREP21 activity kicks-off the CMRE Arctic Science & Technology Strategy, which identifies the long-term objectives of the Centre in the Arctic Ocean over the next decade as well as the actions that must be implemented in order to achieve these goals. This Science & Technology Strategy addresses the environmental changes in the Arctic Ocean that may lead to significant modifications of ASW in Arctic waters. Based on a fundamental understanding of the Arctic environmental transformation, the Strategy will result in the identification and requirements to develop a Rapid Environmental Assessment in support of Arctic ASW operations.